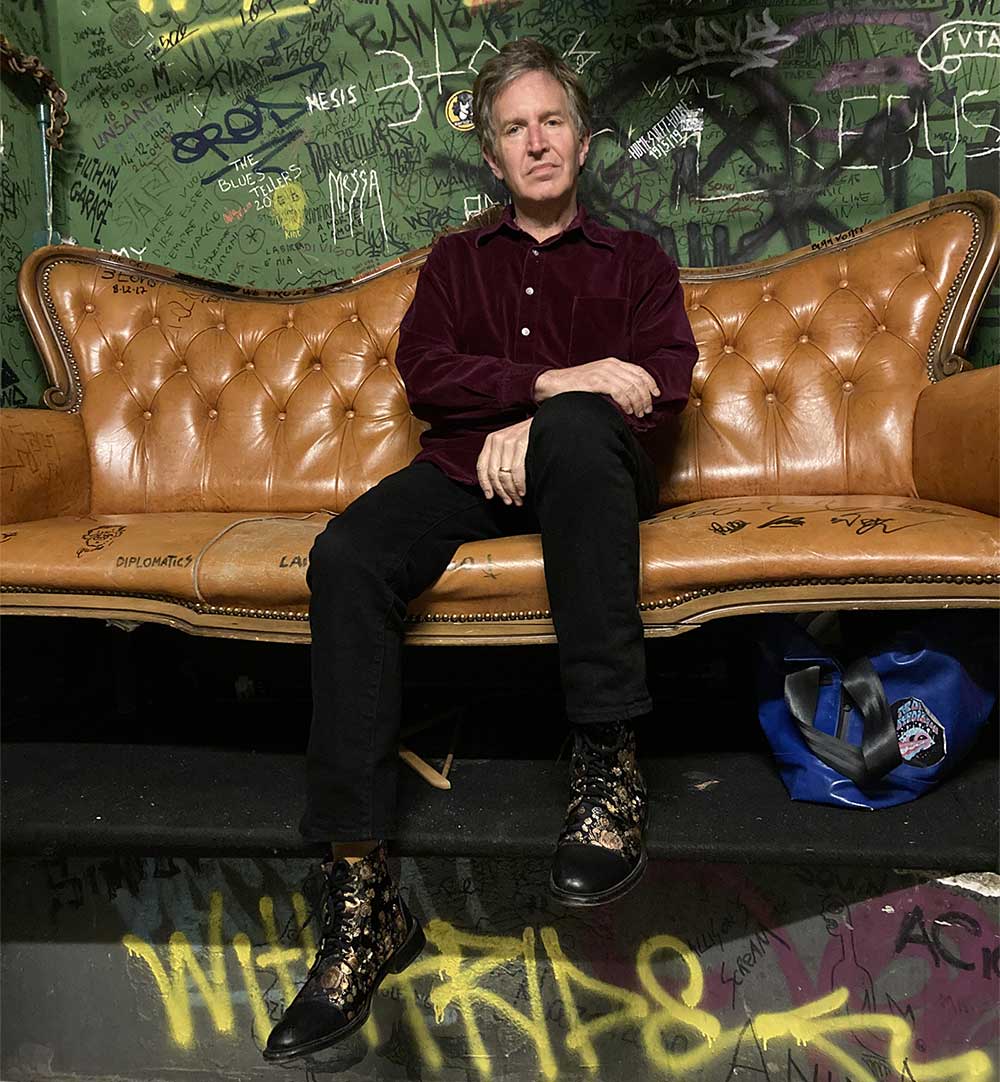 His email address and his Instagram handle are both “cultartist.”   He’s never had a top 40 record or won a Grammy award.

And yet Steve Wynn has forged a four-decade career in which he’s recorded over 400 songs and played well over 3000 shows to fans around the world who can name and debate every song across the dozens of records he’s made in his various musical guises.

A cult artist indeed.  And yet, to talk to Wynn, it’s almost as though it was the design from the start.

“Sure, I was a fan of the Beatles and the Stones but my passion always leaned towards the ones who lived below the radar.  Most of my musical obsessions were bands like the Velvet Underground, the Stooges, Modern Lovers, Gun Club—bands like that who never sold records in their time but who also made great records that just grew in stature over time.”

The first band that comes to mind for most people aware of Wynn’s music is The Dream Syndicate.  Wynn founded the band back in 1982 with Karl Precoda, Kendra Smith and Dennis Duck and their debut album “The Days of Wine and Roses” was a cornerstone of the indie rock scene that would develop in the band’s wake.

“I’ve made a lot of albums and, to be honest, I like all of them and they’ve mostly been received really well but that one is the one that will always come up first with anyone who talks about my music.  And I’m fine with that.  I’m a fan of that record as well.”

But Wynn didn’t stop in 1982.  The Dream Syndicate continued with three more records in the 80’s and then broke up in 1988.  29 years later they came back with “How Did I Find Myself Here,” the start of a trilogy of new records made in Richmond, Virginia that put the band back in the spotlight, picking up where the band left off and taking the old sound to brand new places.

In between those two eras of The Dream Syndicate, Steve made 11 solo albums and toured incessantly with his various solo bands including the much-loved Miracle 3 with his wife Linda Pitmon on drums, Dave Decastro on bass and alsoJason Victor who would end up as the guitarist of the Dream Syndicate Mach II.  Wynn took a break from the Miracle 3 in 2008 to travel to Slovenia and make “Crossing Dragon Bridge” which Allmusic has called his “Masterpiece.”   The bulk of Steve’s other solo material was reissued in the 11CD box “Decade” which compiled every track he recorded between 1995 and 2005” along with 67 previously unreleased tracks.

Those two eras of record-making should be enough, but Wynn has always thrived on collaboration and new cities and scenery for inspiration and has taken detours into various side projects, all of which had their own followers, successes, and touring lives.

Most currently he is still an active member of The Baseball Project—a band that has made 4 albums entire about—you guessed it—baseball.  His bandmates in this very specialized project are REM’s Peter Buck and Mike Mills along with Scott McCaughey of the Minus 5 and Young Fresh Fellows and, once again, his wife Linda.  The band’s first two shows were in 2008 at Steve and Linda’s wedding and then a month later The Late Show with David Letterman.  The band plays frequently, often at major league games, becoming what Steve jokingly calls “my only band that plays stadiums.”

There were also a pair of records each with Gutterball and Danny & Dusty.  The former was an 80’s supergroup of sorts with Bryan Harvey and Johnny Hott of House of Freaks along with Stephen McCarthy of the Long Ryders, Bob Rupe of the Silos and Armistead Wellford of Love Tractor.  And the latter was his “weekend bender” project with Green on Red’s Dan “Danny” Stuart.

“Every project I’ve ever done is still active,” says Wynn.  “Some are just busier than others.”

He’s a bandleader, guitarist, and singer but Steve considers himself first and foremost a songwriter.  “I wouldn’t have had any kind of a career unless I had been able to write songs.”  His songs have been covered at various times live and on record by REM, Yo La Tengo, Concrete Blonde, Luna and even teen pop idol Allyssa Machalka who sang his “Amphetamine” in the movie “Bandslam.”

«One of rock’s true heroes of the underground.» – Philadelphia Weekly

«A force to be reckoned with and cherished.» – London Sunday Times

«A first-class songwriter in the simple-yet-profound tradition of Lou Reed, Neil Young and post-Beatles John Lennon, [with] an ear for balancing his pop sensibility with artful dissonance.» – PopMatters.com